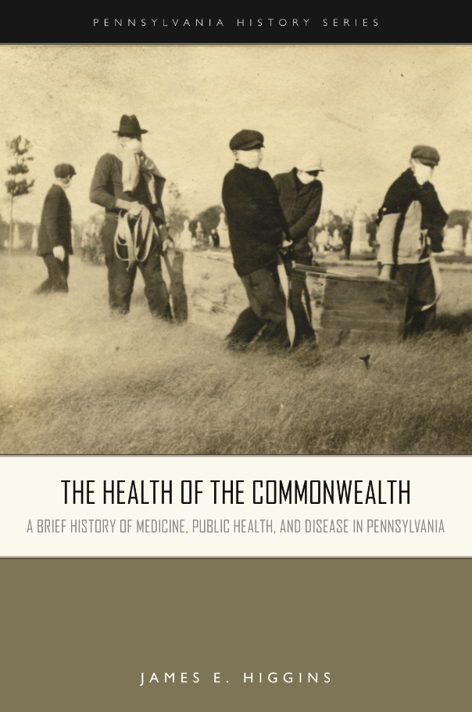 The articles are summarized by James Higgins, an expert on the history of influenza in North American and European cities. He recently published an op-ed in the Morning Call comparing responses to the 1918 Influenza in Bethlehem and Allentown.
We are also delighted to share that his forthcoming book, The Health of the Commonwealth: A Brief History of Medicine, Public Health, and Disease in Pennsylvania, will be published later this year by the Temple University Press as part of our “Pennsylvania History Series.”
Higgins earned his doctorate in history from Lehigh University and now teaches at Rider University, Jefferson University and DeSales University.

COVID-19 in Context of Pennsylvania’s History of Public Health, a Brief Overview

Once again the efforts of our commonwealth are turned to fighting a powerful outbreak of disease, our lives made melancholy by the burdens of isolation, sickness, and the loss of loved ones.  Unlike the generations that lived between the founding of Penn’s Woods and the end of World War I, almost no one alive today has even the dimmest recollection of living during a time of plague, especially one spread through the air we breathe or the things we touch.  It is fitting, then, that the historian is called to explain and place in perspective our present struggle with COVID-19.

Jubilee Marshall’s “Race, Death, and Public Health in early Philadelphia, 1750–1793” is ripe with parallels to COVID-19.  Marshall highlights the disparity in access to medical care and public health suffered by African Americans in the eighteenth century, a state of affairs that still exists and has resulted in higher rates of death for black Americans.  Perhaps most important was the experience African Americans during the 1793 yellow epidemic, when a people marginalized by society became suddenly integral to its functioning, much as transit workers, grocery store employees, and caretakers in nursing homes have suddenly found themselves essential, and have suffered high rates of sickness and death as a result.

Two essays on influenza,  Sarah Wilson Carter’s “The 1918 Influenza Outbreak in Harrisburg” and Christina M. Stetler’s “The 1918 Spanish Influenza: Three Months of Horror in Philadelphia” track most closely with the COVID-19 pandemic, in kind if not in severity.  Carter’s excellent use of GIS data reminds us that epidemics do not strike at random, and even a small community will see variations in rates of infection.  Stetler’s work on the most-studied outbreak of influenza in a large urban area should remind us that the relatively low rates of morbidity and mortality in Philadelphia’s COVID-19, even with the city’s proximity to New York City and New Jersey, means the long shadow cast by 1918 has acted as a catalyst for swift response by her modern health leaders.

When the pandemic passes, the story of Pennsylvania in the general saga of the global experience will be left increasingly to the historian to decipher and pass on to people who, many years from now, will look for evidence of its presence in their communities and families.  The work of James E. Higgins, “A Lost History: Writing the Influenza Epidemic in Pennsylvania, 1918–1922,” reminds us that the foundation of future narratives will find their foundation not in the sweep of the global pandemic, but rather in the quiet corners of our communities who once again rose to meet the challenge of a plague.