From Afghanistan to the offices of the Pentagon: U.S. Army historical documents to be accessible anywhere, anytime

Thanks to a large-scale digitization project now underway, the U.S. Army Heritage and Education Center will make its important, immense historical collection available instantly and easily to Army leaders, educators, veterans, students, and researchers anywhere in the world. 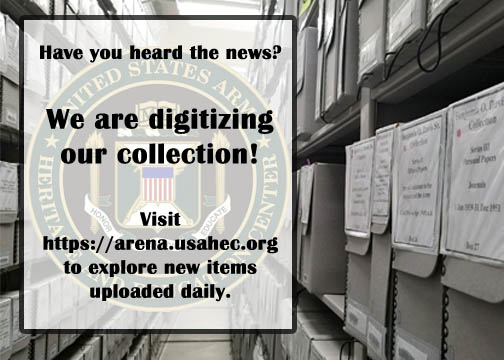 In the first year of the multi-year USAHEC project, newly digitized material is putting at anyone’s fingertips the historical materials that enhance understanding of the past and guide thinking about current and future national security issues. USAHEC will select material for digitization that will enable historically informed thinking about modernization, nuclear weapons, homeland security experiences, recruiting, social change, among others. Now available —

“This is one of the largest single undertakings to digitize historical materials ever attempted,” said USAHEC Director Geoffrey Mangelsdorf. “Over the next five years, new material will be uploaded daily into the online search interface system. This will be a radical change in how military leaders, military students, and scholars can leverage our extraordinary collection. General officer papers, battlefield reports, Soldiers’ journals and letters, and 33 million images will be accessible anywhere, anytime.”

U.S. Army Soldiers’ personal historical materials, such as diaries, letters, artifacts and audiovisual items, are among the truly unique elements of the USAHEC collection. For 52 years, USAHEC has collected and preserved the personal historical materials of Soldiers from five-star General Omar N. Bradley to the most junior Soldiers. When digitization makes these accessible anywhere, anytime, their thoughts, observations, and emotions will inform both the Army and the public.

Access the keyword searchable online system, by visiting https://ahec.armywarcollege.edu and clicking on “Explore.” Please note: As a component of the project, we introduced a new content management hosted system, and we are soliciting feedback for the interface and search functions. We are still developing the interface of the search engine, and we want user input! This is one of the reasons we built in a Search Tips component in the menus, why we placed “Ask us a Question” right up front, and why we included a User Survey. The input we receive from users will help us refine the system, and make our materials more accessible.

The USAHEC is the U.S. Army’s preeminent archive, academic library, museum and research complex with extensive historical resources for Soldiers, researchers and visitors. As an organization deeply involved with both the Army and the public, USAHEC is dedicated to preserving the legacy of the men and women who have served their nation as Soldiers and to educating the military and the public on the important role of the Army in U.S. history.